Coach K credits his success in life largely to his parents’ love, work ethic, and tenacity. Another important ally played a role in Coach K’s success: a community center that became a second home to him. That community center changed his life.

Because of these influences, Coach K leads fundraising efforts for the Emily Krzyzewski Center, a community center named in honor of his late mother. The center opened in February of 2006 and Krzyzewski serves as Chair of the Board of Directors for the Center. 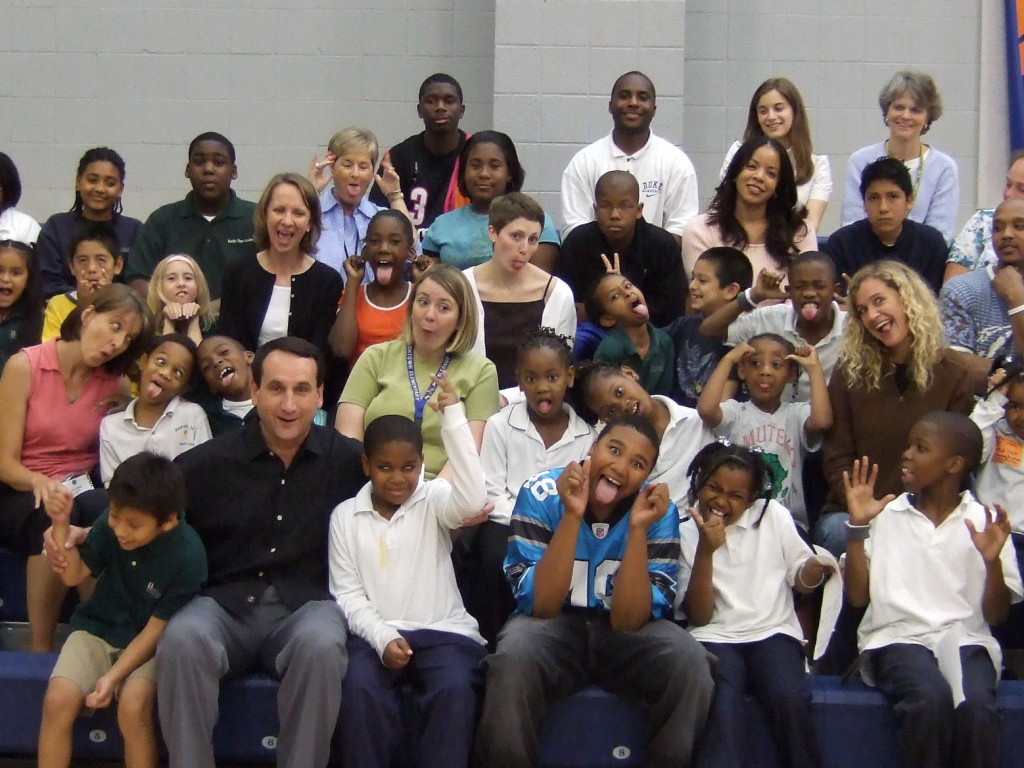 The Center’s mission is to inspire economically disadvantaged students to dream big, act with character and purpose, strive for academic excellence, and reach their highest potential as future citizen leaders.  Their K to College Model is founded on three core beliefs:

In 2000, Coach K become the first winner of the Verizon Reads with the NABC Literacy Award.

In 2003, Krzyzewski launched the K Academy, a summer fantasy camp to assist with several Duke basketball projects, including the scholarship endowment fund.

Krzyzewski and his entire family, wife Mickie and daughters Debbie, Lindy and Jamie, have been involved in campaigns to stay in school and against alcohol, drug abuse and drunk driving.

Coach K and the Duke Community

The students at the university are also an important part of Coach K’s life. He appreciates their support and often finds a way to include the students, especially those camped out in Krzyzewskiville, a tent community erected each season outside of Cameron Indoor Stadium for students wanting to get a head start on securing tickets to games. He has been known to treat the fans camping out for days, or even weeks, to a pregame strategy session in Cameron or to buy them pizzas while they wait in line. He knows that what makes Duke special is the unique relationship he and his team have with the school’s student body. The “Cameron Crazies” are regarded as some of the best fans in all of sports.

The university also recognized that vital role on campus, awarding him Duke’s highest honor — the Medal of Honor — at the University Founders’ Day Convocation in 1997.

In September 2001, Krzyzewski and his wife Mickie created the Krzyzewski Family Scholarship Endowment for Duke students from the Carolinas. The $100,000 scholarship, the result of the Krzyzewskis’ gift and additional funds from The Duke Endowment of Charlotte, will provide assistance to undergraduates from North and South Carolina.

“Mickie and Mike Krzyzewski both do so much for our university,” said Duke President Nan Keohane following the gift. “Their many contributions to our athletic program are well known, and their support of undergraduate academic and residential life at Duke should be, as well.”

During the fall of 2002, Coach K received an Honorary Alumnus Award from the Duke Medical Center for his contributions to the Duke Children’s Health Center. Krzyzewski and his family have made the center a focal point in their efforts to raise the standard of clinical care for children.