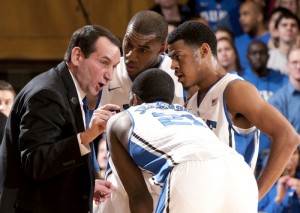 Krzyzewski’s victory total offers evidence of his success, but even more impressive are the five national championships. The fifth title came last season with a 68-63 win over Wisconsin in Indianapolis, marking the third time Duke has captured the crown in the city. In addition to the 2015 run to the title, Krzyzewski led Duke to NCAA championships in 1991, 1992, 2001 and 2010. Only two coaches since John Wooden have led their programs to back-to-back championships (Coach K and Billy Donovan) and Krzyzewski’s five titles are also second only to Wooden (10) in NCAA history.

In 2005-06, Krzyzewski passed Wooden to move into first on the chart of coaches who have led their respective schools to a No. 1 national ranking. Coach K has now led Duke to the top spot in the AP poll in an NCAA-record 16 seasons, including 11 times in the last 18 years. Under Krzyzewski, Duke has played far more games as a No. 1 ranked team (218) than it has as an unranked team (141). He has guided the Blue Devils to a 190-28 mark as the top-ranked team in the AP Poll.

Coach K and the Blue Devils have been a fixture on the national basketball scene with 20 consecutive NCAA Tournament berths from 1996-2015 and 31 in the past 32 years. Overall, he has taken his program to postseason play in 32 of his 35 years at Duke and is the winningest active coach in NCAA Tournament play with a stunning 88-26 record for a .772 winning percentage. On March 20, 2005, Krzyzewski surpassed Dean Smith’s career tournament win total of 65 with a 63-55 triumph over Mississippi State in the second round of the NCAA Tournament.

To top off an incredible year in 2001, after Duke won its third national championship, Krzyzewski was named to the Naismith Basketball Hall of Fame class along with Temple’s John Chaney and former NBA star Moses Malone. The induction ceremony was held in Springfield, Mass., on October 5, 2001. In typical Coach K fashion, he was adamant in sharing the honor with those around him.

Krzyzewski was honored in December of 2011 as Sportsman of the Year by Sports Illustrated. He shared the SI cover with Tennessee coaching legend Pat Summitt.

TIME magazine and CNN named Krzyzewski “America’s Best Coach” in 2001 as part of a joint venture between the two media outlets. The criteria for the selection were not limited to any sport or any level of play.

In all, Coach K has been named the National Coach of the Year 12 times in eight different seasons by major organizations, including UPI and Chevrolet (1986), Naismith (1989), the NABC (1991), The Sporting News and Naismith (1992), Basketball Times (1997), the NABC and Naismith (1999), Chevrolet (2000) and the Victor Awards (2001). In 2004, he was named the Claire Bee Coach of the Year that honors the active Division I men’s basketball coach who has made the most significant positive contribution to his sport during the preceding year. 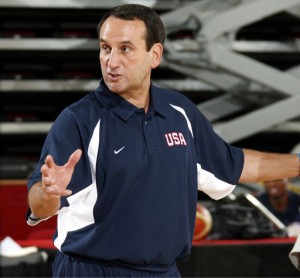 In 1992, The Sporting News named him the Sportsman of the Year, becoming the first college coach to win the honor. The magazine said, “On the court and off, Krzyzewski is a family man first, a teacher second, a basketball coach third, and a winner at all three. He is what’s right about sports…”

Krzyzewski has been named the USA Basketball Coach of the Year in 2006, 2007, 2009, 2012. He was named recipient of the United States Sports Academy’s 2012 Amos Alonzo Stagg Coaching Award after guiding Team USA to the gold medal in the London Olympics. Krzyzewski also received the Stagg Coaching Award in 1992 and 2009.

Krzyzewski has been a prominent figure on the USA Basketball scene throughout his career. On Oct. 26, 2005, his role on the international basketball world was thrust into the limelight when he was named head coach of the USA Basketball Men’s Senior National Team.

Coach K helped USA Basketball regain its position in international basketball during his first stint as the national team coach (2005-08) by instilling the same team-first principles he utilizes as the foundation for success at Duke.

Krzyzewski’s players know how special their coach, mentor and friend is.

“I played for the greatest college coach of all-time,” said Shane Battier, one of the most decorated players in the history of the game. “It was an amazing journey.”

Two-time National Player of the Year Jason Williams echoed Battier’s sentiments: “It’s a dream to play for a guy like that — a guy who’s just a rock, who believes in you every second you’re on the court. I love Coach K. I’d run through a brick wall for him.”

Coach K’s 34 years at Duke have been driven by an unmatched standard of excellence. His Duke career includes: